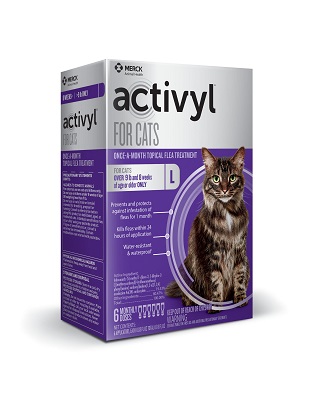 Activyl is a monthly spot-on flea control for cats. The active ingredient in Activyl is indoxacarb. Indoxacarb works by bioactivation – enzymes inside the flea activate indoxacarb and release its full flea-killing power. There is no known flea resistance to indoxacarb. Activyl stops flea feeding, followed by paralysis and death after exposure to product. Controls fleas on cats in a home environment.

Activyl contains indoxacarb, an active ingredient, which was specifically developed to overcome insect resistance in crop protection. Indoxacarb is a pro-insecticidal compound that requires enzymatic activation in the flea where it is converted into its highly potent insecticidal form. Activyl is metabolized differently in insects than in mammals. Unlike insects, mammals mostly metabolize indoxacarb into nontoxic metabolites.

Activyl Spot-On for Cats (over 9lb)

Activyl contains a highly efficacious agent: indoxacarb. Activyl is unique because indoxacarb was designed as a pro-insecticide–that requires biological or metabolic activation, also known as “bioactivation”, in susceptible insects to convert it to its highly insecticidal form–thus enhancing its selective toxicity.1 In addition, indoxacarb works at a site of action in the flea different from other commercialized insecticides used for flea control.1 The indoxacarb in Activyl is bioactivated in the flea by enzymatic N-decarbomethoxylation changing it to a more active, highly insecticidal metabolite.

A unique mode of action

Indoxacarb produces its potent effects at a unique binding site in voltage-gated sodium ion channels of the nervous system of susceptible insects.4 This effect differs strikingly from those reported for other insecticides such as pyrethroids, also known to affect the voltage-dependant sodium channels, but at a different site.1, 2, 4

The active metabolite of indoxacarb induces irreversible hyperpolarization of insect nerve cell membranes. It blocks the sodium current amplitude in the neuron differently than the pyrethroids. This results in impaired insect nerve function, feeding cessation, paralysis and death of susceptible insects.

Activyl also kills developing stages of fleas in the environment of treated dogs and cats, meaning that these stages cannot develop into biting adult fleas.

Since more than just adult fleas are affected, pets get relief and the flea life cycle in the environment is also inhibited, rapidly solving the many stages of your client’s flea problem.