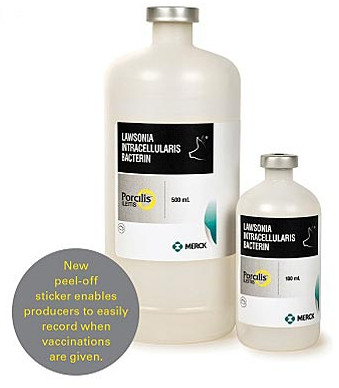 Shake well. Warm the vaccine to room temperature inmediately prior to administration. Using aseptic technique, inject 2 mL once intramuscularly (IM) into pigs at 3 weeks of age or older.

In today’s modern swine production systems, ileitis continues to be a problem and its impact in reducing pig performance can be a tremendous drain on profitability. Merck Animal Health now offers the first injectable vaccine in your fight against ileitis.

A challenge study showed that Porcilis Ileitis is effective for at least 20 weeks after vaccination. Specifically, it:

The proof? Longest duration of immunity on the market – 20 weeks.

Common and costly, ileitis continues to cause production variation within groups of finishing pigs. It’s responsible for poor feed conversion and a 6-20% reduction in average daily gain, which means increased days to market and increased end weight variation. Affected operations also see an increased number of culls and high mortality.

Also known as porcine proliferative enteropathy, this disease is caused by the bacterium Lawsonia intracellularis, which lives inside the cells of the intestinal lining. L. intracellularis can cause a number of harmful changes to the small intestine. This means nutrients are not absorbed properly and performance suffers.

Chronic ileitis typically occurs after weaning or between 6 and 20 weeks of age. Clinical signs are often slight, including soft, watery and/or pasty diarrhea, or the disease can be subclinical, which means that there are no overt signs of disease.

The most prevalent sign of subclinical ileitis is a variation in performance and failure of part of the group to sustain growth despite normal feed intake. Pigs may be eating normally but they are growing slowly and feed efficiency is negatively impacted. It has been reported that ileitis can slash average daily gain by 38% and feed efficiency by 27%.1
Stress, from things like weather and moving or commingling pigs, may cause a subclinical infection to become clinical.

Studies found that nearly 42% of grow/finish operations reported clinical ileitis and nearly 94% of herds with no clinical signs were found to have subclinical ileitis.2,3

Acute ileitis tends to be a hemorrhagic form of the disease and commonly occurs in young adults. Replacement gilts and young boars are the most likely animals to show signs of disease. Black, tarry feces is often the first clinical sign. Some animals die quickly without any changes in fecal consistency or appearance and only show extreme paleness due to blood loss into the lumen of the bowel. Around 50% of pigs affected with acute ileitis will die, with the remaining recovering in a few weeks.

The financial impact of ileitis varies widely depending upon the prevalence of concurrent diseases, sanitation and drying between groups of pigs, and inconsistent feed intake. It is estimated that this disease costs producers somewhere between $2.73 and $19.76 per pig in the U.S. annually. 5